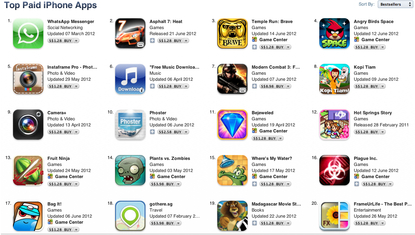 Since Apple has introduced the App Store to another 32 countries, I guessed that Apple didn't forget about Singapore.

It seems that some of the Apps are cheaper when Apple used the SGD in comparison to USD that we have been paying since Apple launched the App Store back in 2008.

However, the difference is minimal from S$0.10 to S$0.40 (or even more, depends). The price seems to be fixed, unlike Android whereby the prices would change regularly in due of the exchange rates.

With over 600,000 applications on offer in the iOS App Store, Apple has found itself facing a growing problem of how to help users discover new software. The Cupertino, Calif., iPhone maker has recently put a pair of changes into effect to address the problem.

Both the App Store and the Mac App Store have begun promoting "Editors' Choice" apps prominently on their main pages, The Verge and The Next Web noticed on Thursday. The newly-released "Facebook Camera" app was one of the apps given the title on the App Store, while the "Cobook" smart address book application got the nod on the Mac App Store.

Alongside the curated app picks, Apple also appears to have initiated a new promotion as part of its App of the Week pick. The official App Store Twitter account sent out a message on Thursday publicizing "Cut the Rope: Experiments" as an App of the Week free download. Touch Arcade reports that, as far as it can tell, this is the first promotion of this kind from Apple.

Though it's not known whether Apple will continue to offer a free application each week, offer does join several other app discounts and promotions over the long Memorial Day weekend. Big-name studios and independent developers alike have slashed the prices of their software for the holiday.

Apple presumably has more features in the works to help its customers find the right apps. Earlier this year, the company acquired Chomp, an app search engine for iPhone, iPad and Android. In April, reports emerged that Chomp was no longer functioning on Android phones.

The accuracy of app rankings on the App Store have also been an area of concern for Apple. Last year, the Top App lists underwent a reordering after the company quietly changed its ranking system. Apple warned developers against using advertising services that guarantee placement on the App Store's charts.

"Even if you are not personally engaged in manipulating App Store chart rankings or user reviews, employing services that do so on your behalf may result in the loss of your Apple Developer Program membership," the company said in a note.

Some developers have reported being approached by companies offering to use a "bot farm" to fraudulently pump up downloads for an app to push it into the App Store's Top 25 list.

Apple has just released the iOS 5.1.1 firmware for iPhone, iPad and iPod Touch. This update contains improvements and bug fixes, including:

You can update to the iOS 5.1.1 firmware via iTunes, or update over-the-air via Software Update on your iOS device.

Which came first? iOS or Android?